Here’s what you need to know about LGBTQ+ in Accountancy, Tax & Treasury, and Legal

The release of Harvey John’s Diversity, Equity, & Inclusion Report is just around the corner. The survey was conducted between January and March of this year and gathered responses from over 700 professionals within the Accountancy, Tax & Treasury & Legal sectors.

As with the theme of ageism, which we uncovered and recently explored,  the lack of LGBTQ+ voices was also an obvious theme when we analysed the results. With this in mind, we wanted to explore why there might not have been significant data gathered regarding the experience of the LGBTQ+ community across the Accountancy, Tax & Treasury, and Legal sectors.

Looking through the results of our  DE&I survey, it quickly became apparent that there was a lack of information about the LGBTQ+ experience across these sectors and evidence that we weren't hearing from the LGBTQ+ community directly, for example, we found that just 1% of our respondents identified as Trans or Non-Binary. Unlike ageism (which was repeatedly raised as an issue by the market), there was a notable silence regarding matters of sexuality and gender identity. Instead, it was mostly referred to alongside other groups, with only one respondent addressing the need for “More leaders who fit into the DE&I groups - e.g more partners who are openly LGBTQ*”

We cannot  - and do not - claim to be experts on diversity issues but, as recruiters, it’s pertinent to ask why there is a lack of LGBTQ+ representation in Accountancy, Tax & Treasury, and Legal...

Unlike ethnicity or gender, sexuality and gender presentation are not always something you have to disclose. According to Stonewall research, 35% of LGBTQ+ employees have disguised or hidden their sexuality at work as they’re afraid of discrimination in the workplace. Could this be a reason for the absence of LGBTQ+ inputs in Harvey John’s survey?

Interestingly, Stonewall offered key insights on the LGBTQ+ experience in the workplace:

Matters are unfortunately worse for members of the LGBTQ+ community who are also part of an ethnic minority. 1 in 10 black, Asian and minority ethnic LGBTQ+ staff (10%) have been physically attacked because of their sexual orientation and/or gender identity, compared to three per cent of white LGBTQ+ staff and 1 in 8 black, Asian and minority ethnic LGBT employees (12%) have lost a job in the last year because of being LGBT, compared to four per cent of white LGBT staff

When considering this and our survey results, the lack of LGBTQ+ representation in the Accountancy, Tax & Treasury, and Legal sectors could be quite telling.

There has been a lot of conversation on LinkedIn recently about being able to bring your true self to work. According to their latest survey, almost a quarter of LGBTQ+ people in the US feel they have to hide their identity at work.

Clearly, we still have a long way to go to foster inclusive workspaces, where people can be their authentic selves without fear of discrimination.

How are the Accountancy, Tax & Treasury, and Legal sectors tackling LGBTQ+ issues?

When we asked whether employers have network groups in place for diversity groups, it was encouraging to see that the majority (54.9%) had implemented programmes around this.  By and large, network groups appear to be the most popular method to combat discrimination as it creates an environment to facilitate knowledge, provide access to peers, [and have] more interaction”, as noted by Tax Senior Associate at a Charity / Non-Profit, who also claimed that network groups work as a “more active approach to diversity”. 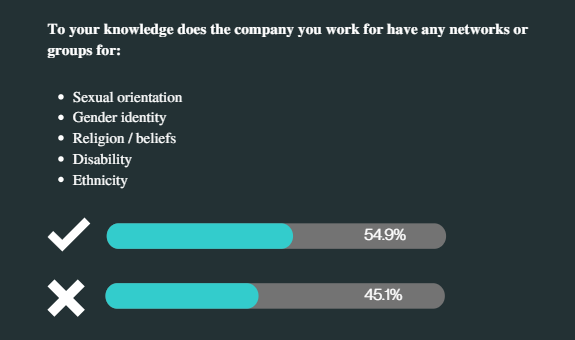 We spoke with a member of Deloitte’s Proud Network, who had a good experience within the group and felt that diversity networks are key in educating those both within and outside the LGBTQ+ community:

“Lunch and learns’ were a stand-out experience for Deloitte, these meetings instigated discussions around important and challenging issues facing the community. The latest one was aimed at educating and discussing current transgender rights and a previous one had explored the history of Pride.”

Our contact at Deloitte highlighted how the ‘Proud Network’ values intersectionality to a high standard and collaborates with other diversity groups. Not only does this educate those outside the community, but it also offers education on how to become better allies.

When discussing how employers can go a step further to improve LGBTQ+ experiences in the workplace, Deloitte has been addressing the lack of representation or visibility of those within the community at the leadership grades. This reflects the consensus of our data where over 50% of respondents believe there is a lack of diversity at the senior management level and beyond.

It is clear that network groups can play a great part in improving the experiences of the LGBTQ+ community within the workplace. By networking with those with a shared experience, it promotes inclusivity enabling many people to be more of their authentic selves at work. And, we all know that, when we can be ourselves, we not only produce better quality work but we enjoy it more.

Work still needs to be done

Although many strides have been made by UK organisations, there is plenty of work that still needs to be done to tackle these issues and achieve equity.

For firms with a global office network, there remain ever greater challenges on how to be truly inclusive as we then face country-specific and cultural nuances. Our Director & Head of Tax, Alex Mann, recently connected with a Big 4 Partner who was also a key leader in the firm’s  DE&I initiatives.  While there’s been some fantastic progress made in some local offices, it was concerning to hear how the firm’s leaders in countries such as Russia are reluctant to commit to LGBTQ+ policies due to prevailing attitudes and laws in the country. This makes it difficult for ‘global’ firms to not only implement company-wide but also raises the question as to how much alliance they really have with the LGBTQ+ community.

Discrimination - no matter the form - is borderless. While leaders in particular regions face more challenges than others, global businesses have a global responsibility to show consistency in their values and leave a positive footprint on their community.

What can we do?

We recognise that it is difficult to totally escape the biases that exist across the market but Harvey John is committed to actively reducing them and using our position to influence change.

One of Harvey John’s key pledges is our commitment to always request and understand our client's DE&I policies, this way we can educate - and be educated - on how they support diverse groups, including the LGBTQ+ community.

To register your interest in our 2022 DE&I survey, click here.